We have successfully completed the first of several software beta tests. The site was a busy surgical hospital in Nebraska. Four nurses (Andrea, Bridget, Cathy, and Raime) used the software intensively for four consecutive 12-hour shifts (Andrea and Cathy in two day shifts; Bridget and Raime in nights). We learned a lot, caught and repaired some bugs, and are most encouraged by the positive outcome. Here are a few observations. 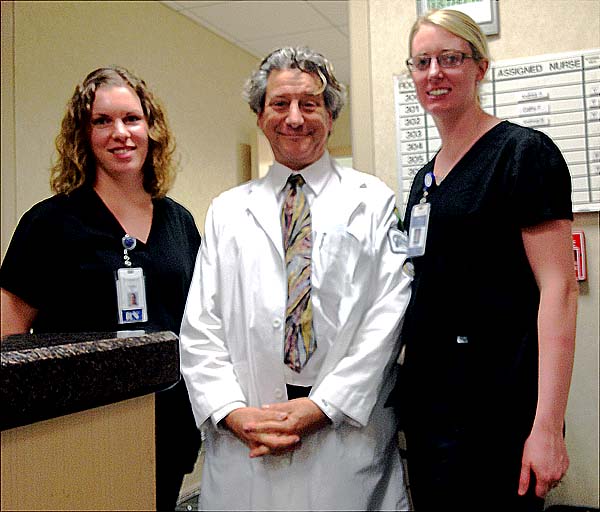 "Late" tasks -- Nurses aren't perturbed by icons that have turned red.  I thought, yikes, I wouldn't want any red on my screen, but they just take it in stride and get around to those tasks when they can.  That's a seasoned nurse:  unflappable.  She doesn't get worked up unless it's serious.  Patients are serious;  colors on screens aren't.

So it's ok for them to start a shift with the computer complaining that a few things are already late, no big deal. Thus, one of our lessons is to rethink our policy about not adding to a shift tasks that are already late. When the nurse starts the app half an hour into her shift, it thinks that tasks that should have been done at the beginning are late. Our policy had been to omit them. Rethinking it, we conclude that it is better to have them late than not at all.

The nurses didn't pay attention to the badges on the task and patient icons ("P" for precautions, "S" for supplies, etc.) I suppose these details are of interest to nursing students to whom they don't yet come naturally... but not to the seasoned pros. Perhaps we should offer expert and novice modes.  Or just let people use the features they find useful and ignore the others.

RN Andrea prefers the linear to-do list to the shift-at-a-glance graphical user interface because she doesn't have to tap on an icon to see what task it represents.  She says maybe that will change as she gets to know the icons, but even so she prefers the list view.  She also commended the "Recently-Used Protocols" menu -- for her, it serves the exact purpose for which it was intended:  it saves time.  She doesn't have to hunt for the things she uses repeatedly.

Part of the reason this beta went well was the carefully-crafted shift definitions and protocols I built following the initial meeting with the nursing team. A process like this will be required in some form in order to achieve similar successes at other hospitals. I cannot be at every hospital to conduct it; we'll need to teach users to do this for themselves. The process is not difficult, but neither is it obvious. This is a challenge we must address as we get the product out into the world!

At the end of her long shift, RN Bridget gave us the highest accolade: she asked whether she could keep using the app after the beta ended.  We were pleased to say she has lifetime access, gratis, with our delighted compliments.

We are grateful to the hospital and to its smart, hardworking nurses!